Like a lot of others during the pandemic I got into cycling. I hadn’t been on a bike since I was kid, but after doing a lot of walking, I wanted to explore further and farther, as well as exercise more intensely. 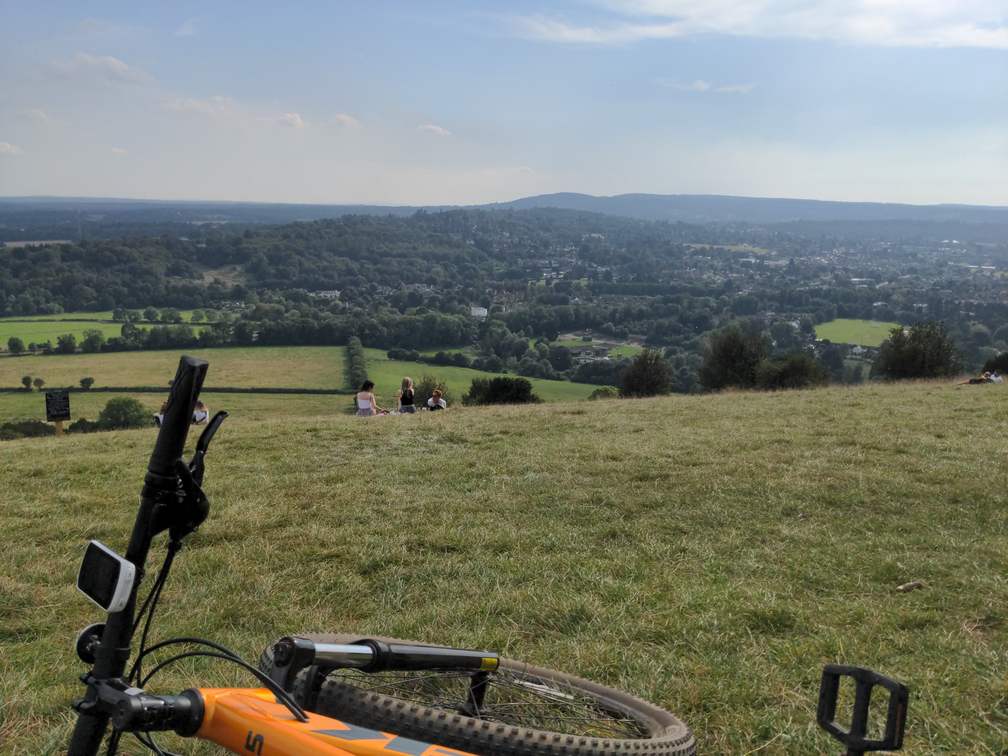 My main concern about cycling was safety, so I bought a mountain bike and stayed off the roads as much as I could. However the same few off-road trails nearby became dull pretty quickly. I soon started to wonder if a road bike would be a more valuable purchase. Before taking the plunge I needed to answer the question: just how safe is cycling?

This essential argument is repeated in many places:

I pulled up UK government statistics from 2019, and the claim in point 2 is true (at least in the UK). There are slightly less deaths of cyclists per billion kilometres than there are of pedestrians: 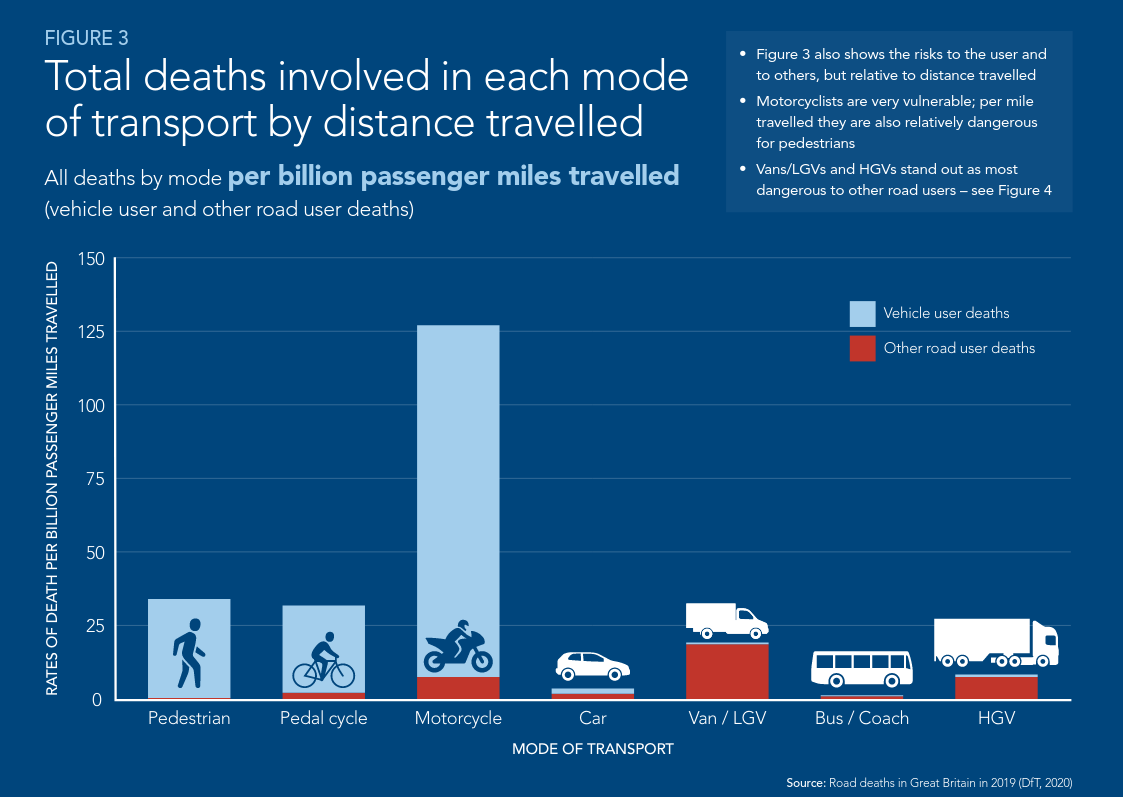 So what’s the problem with the argument? It seems surprising, because cycling certainly feels more dangerous than walking. But on further thought the argument overlooks a few things. First, the data used in point 2 only examines deaths, and not serious injuries.

The other nuance with the statistic is that on a bike you can cover five times the distance in the same time that it would take to walk. The type of journeys you take are different, so distance does not necessarily feel like the best way to compare.

Different Ways of Viewing The Data

I therefore looked for other perspectives on transport deaths data. The following tables are from an old survey carried out in 2000 by a UK government department, which I found interesting as they present the data using different variables.

Compared to 2019 data, the numbers look broadly similar. Fortunately cycling and pedestrian deaths are down over a third since these 2000 statistics, however motorbike deaths are up.

This deaths per billion kilometres data follow what we already discussed. But, it’s notable how high the fatality rate of walking is (even though it has dropped, it’s still 10x higher than for cars). Cycling organizations try to reassure us that cycling is safer than walking, but the main conclusion I draw from this table is that walking is less safe than I thought. This weakens premise 1 of the argument.

When looking at deaths per journey, the rankings change. Air travel suddenly looks more dangerous, while walking looks safer than cycling. But this is just a normalisation of the fact that journeys by foot tend to be short and journeys by air tend to be long. For that reason, I don’t find this table particularly helpful.

Deaths per hour as a metric has a different problem with it though. Imagine if somebody invented a teleportation device, which was just as risky as driving a car over the same distance, but was 1000x faster. This device would have 130000 deaths per billion hours, making it seem extremely dangerous. And yet it would be more useful than a car and equally as safe for performing the same journeys.

In any case, if you know the average speed of each form of transport, this table can be derived from the Deaths per billion kilometres table, and vice-versa.

So that little detour confirmed that “Deaths per billion kilometres” is the most generally useful metric to consider. But for recreational/exercise purposes, “Deaths per billion hours” is also worth thinking about. If you have a two hour slot to exercise, then distance matters less as you substitute one activity for another. Another aspect is whether cycling is a more efficient activity for becoming healthier, which we’ll investigate later.

The situation looks significantly worse for cyclists once considering injuries and not just fatalities. This is from the same 2019 UK government report which the first graph came from: 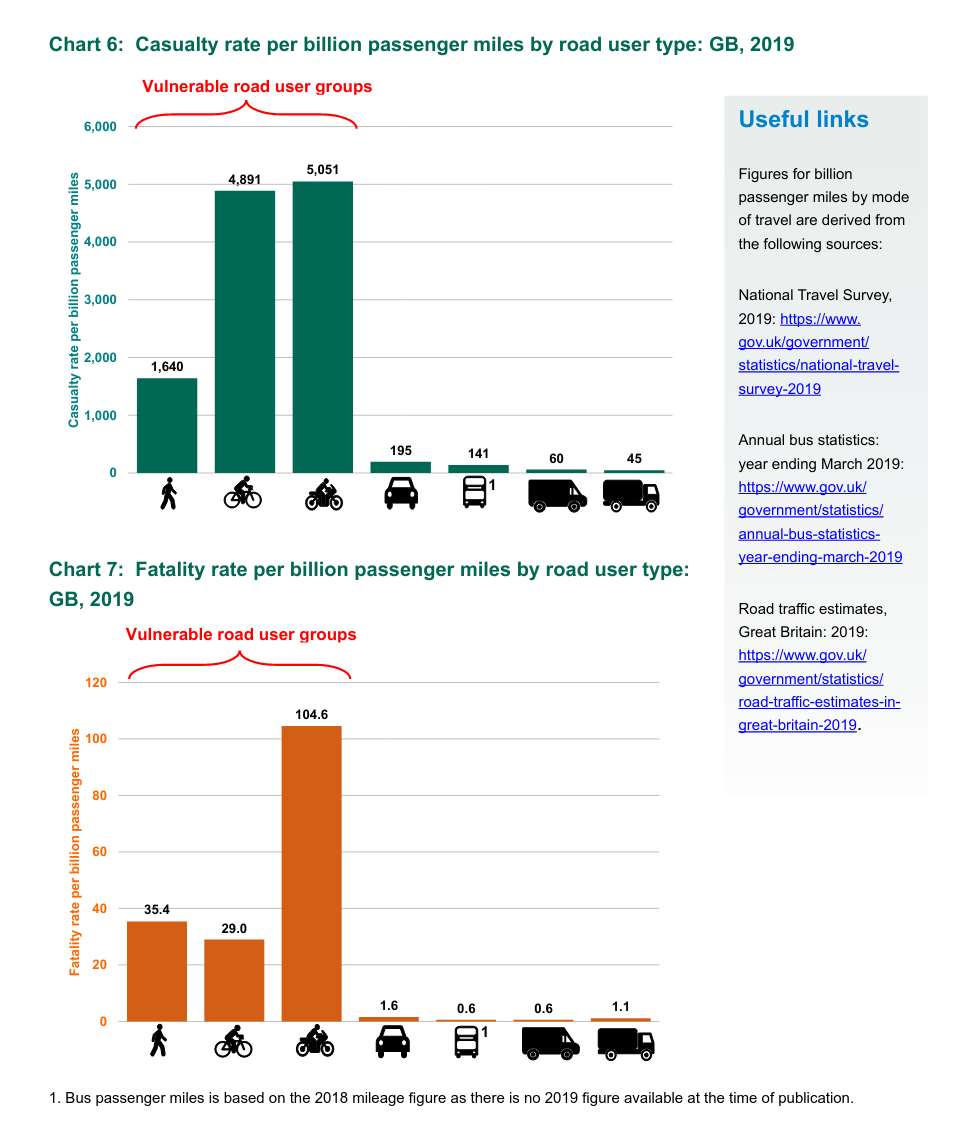 A counter to the original argument could therefore be:

Further, the cycling casualty stats are under-reported. According to a separate analysis, pedal cyclist non-fatal casualties are amongst the most likely to be under-reported in road accident data collected by the police, especially where the pedal cycle was the only vehicle in the accident.”

My Own Cycling Crash

Originally, I didn’t end up finishing or publishing this post, but I did convince myself to buy a road bike, and got very into the hobby. After about a year of regular road cycling, I had a nasty accident.

I was cycling downhill on a narrow country lane. A delivery van appeared ahead, coming towards me and taking up most of the space in the road. I moved to the side to give it room, and hit a pothole in the road. The next thing I knew, I was bleeding on the tarmac, with the driver running over to help.

I received great care in hospital and was lucky in the way that I fell. My bike itself fared much worse, since it hit the side of the van and the front fork split off!

I didn’t report this to the police, as I didn’t consider the van driver at fault. I didn’t see what the police could do other than close the case. Perhaps I should have reported it to them for the statistics alone. If anyone was at fault it was the council for the poor state of the road, I considered making a claim but didn’t in the end.

All this is to say that, I can see why cycling casualties are under-reported. And I can see why vans cause a high number of “other road user deaths”. Even without the driver doing anything wrong that I can recall, the van’s big presence on the road contributed to the accident.

So, the numbers we’ve dug into paint a grimmer picture for cycling than the cycling magazines do. You’re less likely to be killed than you are by walking a similar distance. But you’re much more likely to be injured - almost as likely as you are to have an accident when motorcycling in fact, if not more so due to under-reporting - just the accident is likely to be less severe. Also, walking is more dangerous than you might have thought.

I feel this debunks the initial pro-cycling argument, but there’s a much better argument for cycling.

Regular cycling reduces your chances of dying from many other causes. Research published in the BMJ found that cycling to work is linked with an over 40% lower risk of developing cancer and cardiovascular disease, compared to commuting by car or public transport. This is just one of a number of studies showing incredible benefits to cycling. The studies tend to compare cycling to sedentary travel, but when they do also show benefits of walking, they’re not nearly as strong as cycling. In the linked study, walkers confusingly had a higher mortality rate, particularly from cancer, than drivers.

Other studies have gone further in terms of balancing the health benefits with the risk of injury. Of the main studies, the lowest benefit to “disbenefit” ratio I could find for cycling was 9:1 in this Dutch study. Basically, the studies claim that the benefits of regular cycling far outweigh mortality from pollution and traffic accidents. I couldn’t see where that particular study took into account serious injuries, however the other linked study does by using disability-adjusted life-years.

Personally, I’m back on my bike but taking more care about where and when I cycle. I want the health benefits with minimal risks. And it’s just too much fun.