Once, when I was even more naïve than I am today, I discovered the Myers-Briggs Type Indicator. A lot of human behaviour suddenly seemed to make sense. If somebody told me to follow pointless rules, it was because they were an authoritarian ISTJ. If somebody partied too much and made asinine life choices, it was because they were an Artisan type. I began to pester all of my friends and relatives, begging them to take the test, proselytising for my new true faith.

However, I soon started to have doubts. I read the sci-fi classic Red Mars, in which American and Russian scientists compete to win places on the pioneering Earth-Mars space landing. The scientists are required to pass an MBTI-like selection test to join the expedition. Later, most of the scientists that passed the test admit that they supplied exactly the answers the administrators were looking for.

At first, I was even more interested in the MBTI after reading Red Mars. How much insight did the psychometric questionnaire really have? I decided to re-take it. I had just helped two old ladies cross the road, an episode which was still lurking at the back of my mind. And when the results came through, I had scored the ‘Feeling’ preference.

It soon dawned on me that the different results that I was scoring were based more on my desire to believe things about myself than on real changes in my personality.

I eventually discovered that the MBTI possesses a poor reputation in academic psychology due to its lack of empirical validity. People score different results from month to month; the type descriptions are mostly flattering Forer statements; and we type ourselves against culturally normative concepts; for instance, an introvert in the US is often an extrovert in the UK. Worst of all, the test is a crucial agent in the continuing life of several long-discredited Victorian notions, such as the thinking / feeling axis.

In fact, it is the simple, two-dimensional nature of the Myers-Briggs test that has led to the its popular dominance over more nuanced alternatives like the Big Five. The MBTI is easy to grasp right down to the individual syllables: the hard consonants of ‘NTJ’ seem designed to reflect the decisiveness of the corresponding personality type. In truth, one’s relationship to society is far more multifaceted than a handful of letters can ever begin to indicate.

Unfortunately, the ease-of-use of the MBTI and related fad questionnaires has sparked their enthusiastic adoption by HR departments. These days, persons seeking internships at well-known institutions might be confronted with nonsense like this: 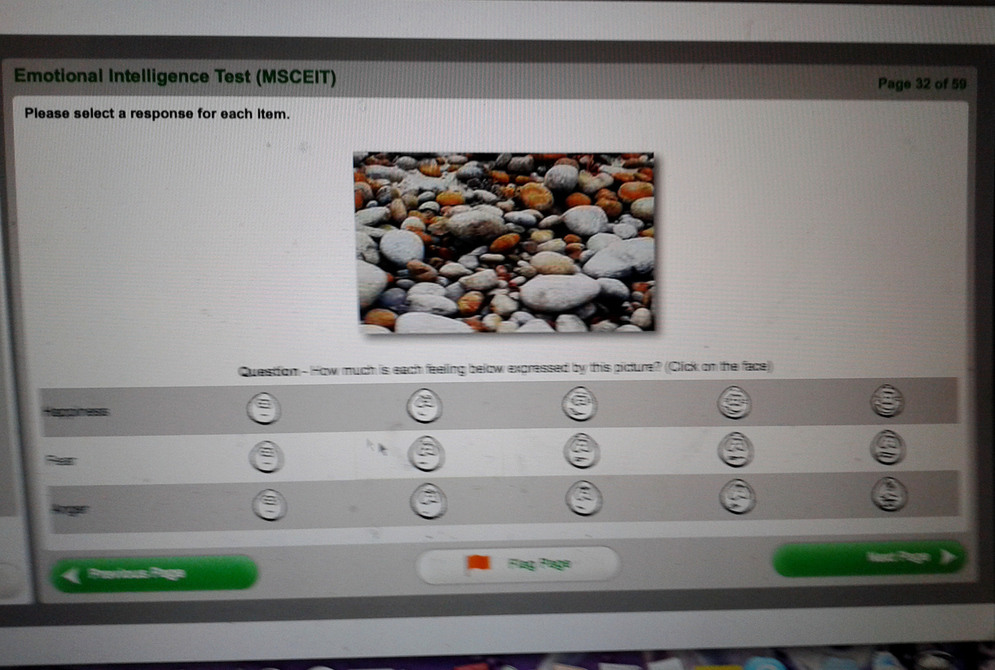 If it is not clear, my friend was being asked here to grade the feelings manifested by a picture of some stones. If he clicks on the wrong potato faces, he could be rejected for lacking in empathy and ‘emotional IQ’. When institutions take this stuff seriously, it is no longer ‘just a bit of fun’; it deserves to be deeply scrutinised.

It seems that everywhere you turn, there are opportunities to quantify yourself, but not enough scepticism about the quantifying tools. This can lead to an unhealthy obsession with the measurements, and less appreciation for the huge underlying complexity of the thing being measured.

I was recently persuaded to retake the well-known ‘Political Compass’ test after about six years in order to measure my matured political views. It claims to challenge the one-dimensionality of the traditional left/right political spectrum, but this test has also got things all wrong.

Consider the following sentences from Pages 2, which you are supposed to grade from 1-5 based on your level of agreement:

These are statements widely accepted by economists. If you aren’t a libertarian fundamentalist, then you should swiftly tick them in agreement. However, as a result, the test will shove you far to the interventionist left for your apparent anti-market sentiment. There were more such statements to be found on the following pages: “What’s good for the most successful corporations is always, ultimately, good for all of us.” Although I tried to be as kind to corporations as I could given these leading questions, I still ended up left of center on the economic axis.

It’s at that point that you start to question what the point of the whole exercise was. The test collapses your various political opinions into numbers which aren’t normalised against those of other test-takers. In other words, its interpretation of your opinion is entirely arbitrary. Curiously, the website has a chart of current UK political parties which places them in positions near-impossible to reach by taking the test: 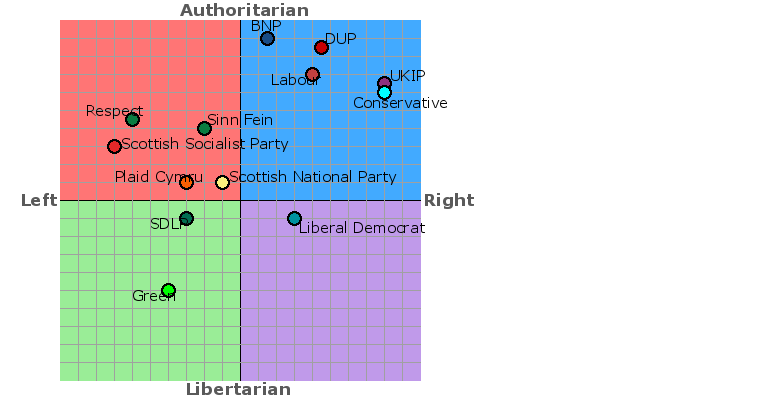 By putting almost all of their test takers on the bottom left, while locating the major parliamentary parties in the top right, the Political Compass test encourages its subjects to feel statistically disenchanted and isolated from the main political parties. If the MBTI has become the easy livelihood of internet marketers and staff training gurus, then tests like the Political Compass appear to be vehicles for stirring up political dissatisfaction. That’s not inherently a bad thing. I just wish these tests would be more honest about how little they really say about us.